A vision for Tomorrow

In order to be in line with the 2°C path, we need a reduction rate of global emissions of roughly 5% per year. To put this in perspective, this roughly corresponds to the emissions reduction from one new COVID outbreak per year. Furthermore, as we can see from the following graph, the pledges from the Paris agreement are not enough. It will be quite an undertaking to get us a 2°C world by the end of the century! 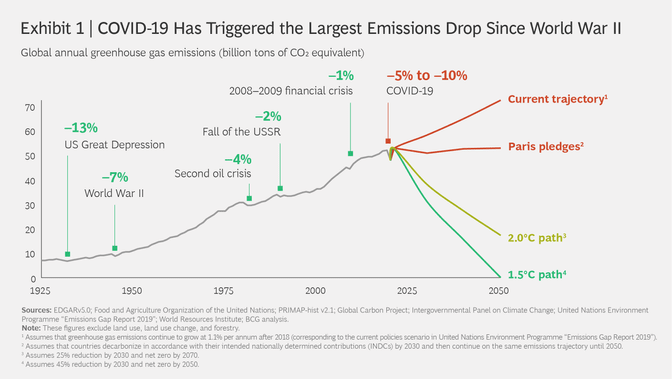 When it comes to climate change, there is no silver bullet

The list of miracle technologies is long: unlimited clean energy with fusion power, direct capture of all excess CO2 in the air, a fully electrified world powered by wind, solar, hydrogen and batteries, geoengineering to cool down the Earth..

This list appeals to our sense of comfort, and gives us a welcomed opportunity to continue living like we’ve been used to. Even though some of these initiatives are required, each of them, in isolation, is far from sufficient given the urgency of the situation. Furthermore, the introduction of a “world-saving” technology has the paradoxical risk of causing an increase in emissions. This is called the rebound effect. For example, a more energy-efficient vehicle tends to be cheaper, which causes an increase in usage, and ultimately increases total emissions. The only way to introduce new solutions without rebound effect is to make sure we accurately measure and restrict emissions associated to usage.

Technology, by itself, and if left unregulated, won’t unfortunately save us.

When Gutenberg introduced the printing press, he created a paradigm shift as the world became able to communicate ideas at higher speed. It continued with the advent of the telegram, the telephone and the internet, where the world underwent a radical transformation as the friction to exchange information decreased. As the amount of content produced on those networks surpassed our ability to make sense of them, Google Search came along and made the world’s information universally accessible and useful.

In evolutionary terms, the invention of systems that increase access to information have compounding effects as they empower a multitude of actors to perform their task more efficiently, which in turns empower other actors to do the same etc.. These compounding effects yield rates of adoption that follow an exponential curve, and thus have rapid and global transformative effects.

Another example of such a system is the Youtube platorm: Youtube didn’t seek to be a better broadcasting station. Instead, it sought to be a platform that enabled others to broadcast themselves. The result? No matter the problem you’re having, Youtube probably has a video that helps you solve that problem, and that has made problem solving more accessible. Network effects, leading to exponential transformations, are key to unlocking scale and speed.

Instead of restricting ourselves to seeking the silver bullet to climate change, what if we sought for compounding solutions that enabled everyone to help transition to a low-carbon world? What would such a platform look like?

The world of today

The way we see it, the world of carbon information is pre-Gutenberg and written in Latin:

If information precedes action, then no wonder we’re completely paralysed! How could we leapfrog carbon information into the internet era?

A world where carbon information is ubiquitous

Let’s imagine for a second that all organisations could get their carbon footprint calculated automatically at an approachable cost. Wouldn’t they start getting an understanding of what it takes to get ready for a low-carbon future? Seing that some competitors are more reliant on fossil fuels, they might even push for a strong carbon price in a selfish interest to get rid of competition. Wouldn’t this trigger a large-scale exponential transformation?

This would pave the way for a future where pressure for the right technologies to develop are present alongside a measured and controlled rebound effect. Instead of a pushing for a single silver bullet, we let Darwinism foster an ecosystem of solutions that each contribute to real reduction in carbon emissions.

The world needs a platform that enables such evolution. It could be seen as the Operating System powering the world of the future, quantifying externalities, making them visible, and democratising meaningful action. Open sourced, it would be a common good, serving regulators as well as organisations in a mutual interest to build a sustainable future.

We believe three key aspects are necessary for such a platform to emerge:

Tomorrow was created with the idea to spark systemic change by making carbon information universally accessible and useful. It started with the open source electricityMap project, and is now followed by the Bloom project with its associated open source integrations and carbon models.

We realise there’s still much work needed in order to have a platform that lives up to that vision. Nonethless, we remain truly excited about about building this future.

We hope that you’ll join us on that journey.

Written by Olivier Corradi
Founder @ Tomorrow, CEO
follow him on